We tend to throw the word 'database' around a lot in Myriad 5 Playout and depending on the context, we might mean something very different!

But technically, there is usually only one database (per site) and all your various data lives within it. In this article we will explore the elements within the database, the correct terminology to use and why you might want to think about what will work best for you.

This diagram represents a simplified view of the structures used to store data in a Myriad 5 Playout installation: 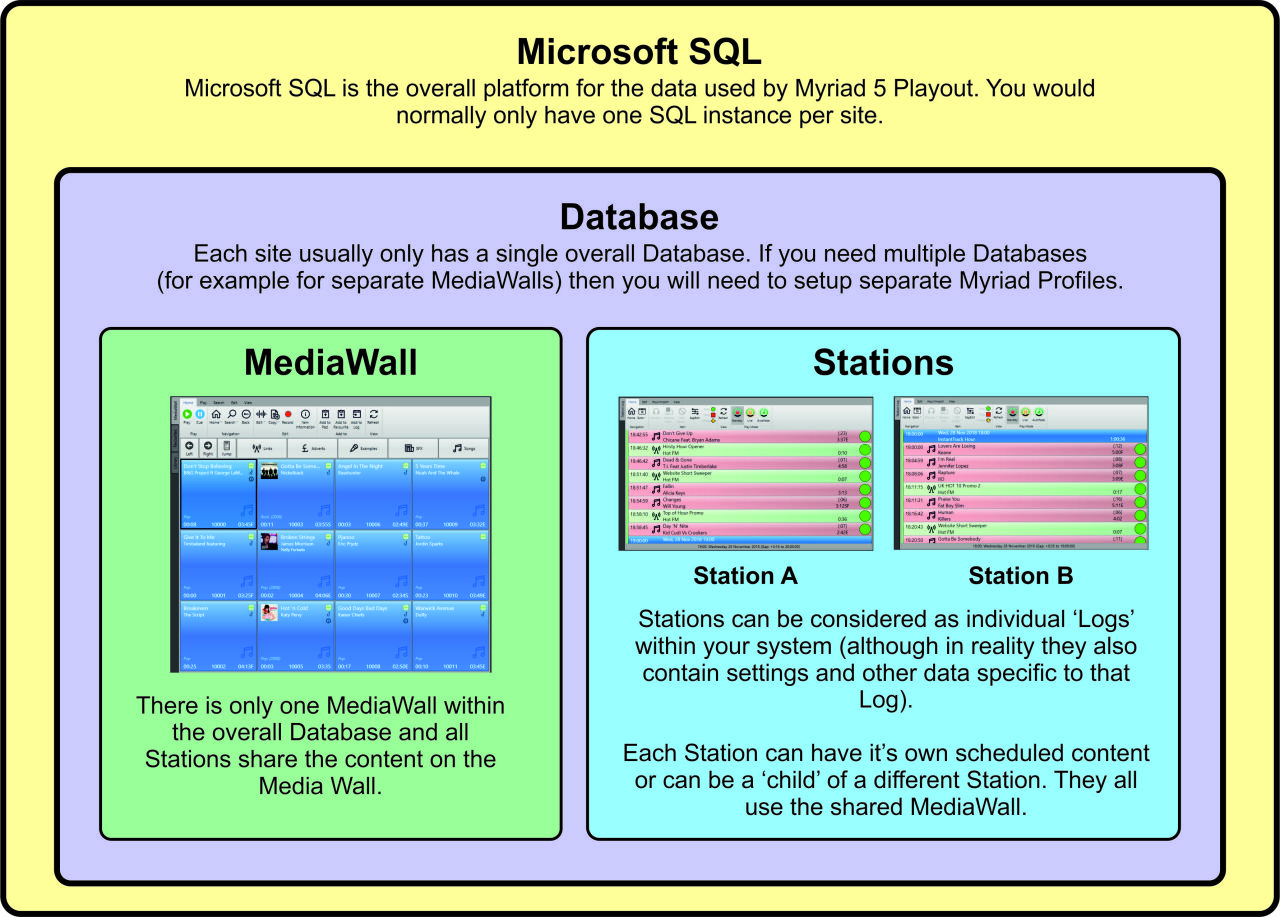 Lets look at each of these structures one at a time:

Microsoft SQL (MS SQL) is the fundamental technology and platform used to organise and store all the data used by Myriad 5 Playout. There are various versions of MS SQL available but most installations will be using MS SQL Express 2016 which is available for free from Microsoft.

MS SQL is much more than just a data storage system, the SQL Server software manages all the data, optimises the content and also performs tasks (such as searches) on the behalf of client software such as Myriad 5 Playout. This means that when your search for a Media Item on the MediaWall, Myriad actually asks SQL to do the search internally and return the results to be displayed to the user. This has several advantages including:

For most situations, we don't need to worry about how clever SQL is and can just enjoy the benefits!

The Database should be considered the overall 'container' for all of your Myriad 5 Playout related data within your SQL instance. In the vast majority of cases, you will only have a single Database at each site but there are exceptions (see MediaWall below).

Each Database contains a single MediaWall and one or more "Stations".

If you do need to use more than one Database then you will need to use Myriad Profiles to load Myriad 5 Playout with different Data Locations settings to 'point' to the different Databases and corresponding MediaWall files.

Now we start to get into the more recognisable parts of Myriad 5 Playout. The MediaWall part of the Database is used to store all the information about the content stored within your MediaWall. 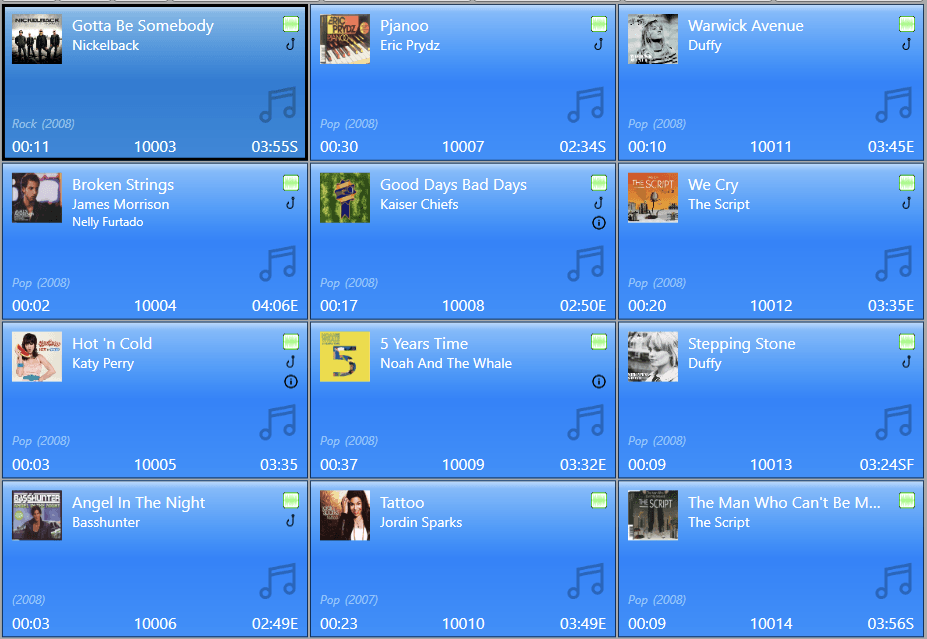 The key thing to keep in mind with the MediaWall is that only one can exist within a Database. This means that if you have multiple Stations at your site (see below) then they will all share a common MediaWall. This may involve content spread out with different areas specifically used by certain stations (like Jingles and Adverts) combined with shared resources (such as Songs).

You can make the MediaWall as large as you like (within reason) so it is easy to separate content on a shared MediaWall.

If you absolutely have to have separate MediaWalls for Stations on a single site then you will need to have multiple Databases (within a single SQL instance) with each containing a totally independent MediaWall. As previously mentioned, you could then use Profiles to allow a single workstation to select which Database to work with at startup.

In Myriad 5 Playout, the term "Station" can be considered to refer to an individual 'Scheduled Log' along with all the corresponding settings for that Log. The Scheduled Log is a 'playlist' of content that can be played in Live or AutoFade. The Log can be generated by a scheduling system (like AutoTrack Pro), manually created or by Myriad Schedule itself (see Introducing Myriad Schedule) 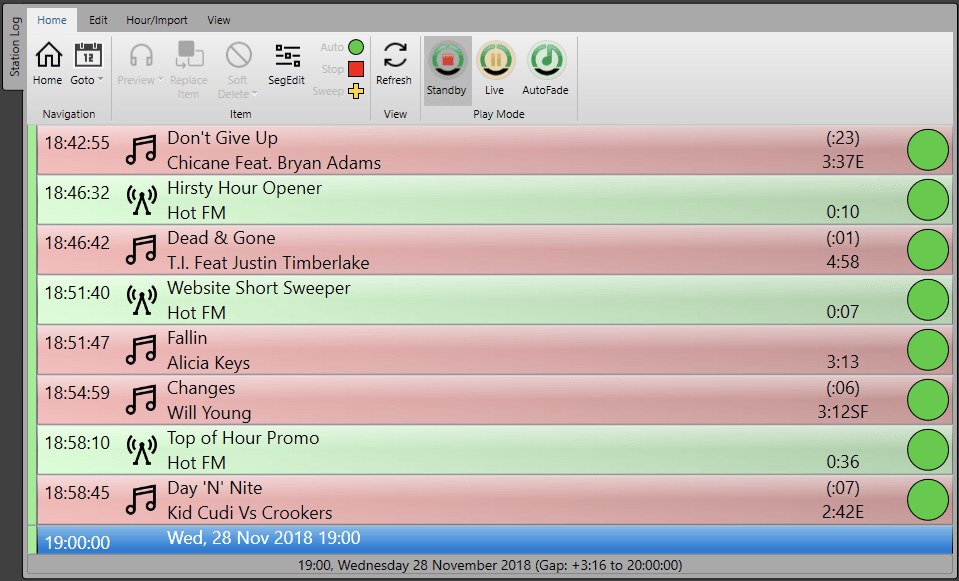 The majority of stations will probably only ever use one Database, one MediaWall and one Station but there are good reasons why you might need more than one Station.

In each of these scenarios, having multiple Stations is the best answer to achieve the end result! Let's take a closer look.

Multiple Services From A Single Site

This is probably the most obvious use for multiple Stations. In this case Hot FM and Hot Gold share a single MediaWall which is divided into different areas to contain the station specific content (like jingles etc). Songs are in a common area although some Songs are only scheduled on one or the other service (and some are scheduled on both).

There are two Stations added to the Myriad Database, and then Myriad Schedule or Myriad AutoTrack Pro is used to schedule unique content to each.

Any Myriad 5 Playout workstation in the building can switch between the Stations as required using the Station options on the File Menu. 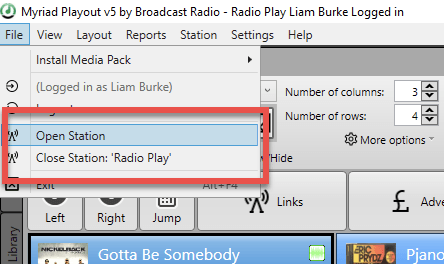 This is a very similar scenario to the Multiple Service scenario but instead of it being two separate services, this is often the same service but a separate automated output that is always running and always ready to use.

You cannot have two workstations running the same Station in Live / Automation at the same time so the answer is to have two Stations, one that is always running and one that you can use in the studio whenever you like.

They could be using the same content (i.e. AutoTrack Pro has sent the same 'Log' to each Station), have totally different content (e.g. you could just let Myriad Schedule pick your automation output) or have a more complex 'Parent / Child' relationship.

Hold on, a Parent / Child what?

In the context of an Automation Sustain Service, the Automation Station might be the Parent and the Studio Station is the Child. In this case, if you only sent the Log output from AutoTrack to Automation Station then the Log in the Studio would appear empty but if you clicked on the Fill This Hour option on an empty Hour, rather than fill the hour using a log file (from your scheduling system) or using Myriad Schedule, it would instead automaticall copy the hour from the parent Automation Station.

This type of configuration is great if you want your studio presenters to have the choice between using pre-scheduled content (eg copy the content from the Automation Station using the Fill This Hour option), manually build an hour by dragging content into the Log or ignore the Log altogether and just drag Media Items into Players.

This configuration is perfect if you normally run from the studio in Live and also use the studio for editing the log and adding Voice Tracks but also want to have a 24 hour automated service that the presenters can just fade up at the end of the day!

And the Training Station scenario?

Now that we have taken a look at Child / Parent relationship, creating a Training Station becomes a lot easier to implement. You would simply create a Station that is a Child of your main Station and use that for Training. The presenters could click on the Fill This Hour option for any hour in the Log that they wanted to practice with and it would copy the hour from the Parent Station, but because it is a totally separate Station, nothing they did would effect your main output.

You can also tag a Child Station as being specifically for training in which case the following special rules apply:

These simple precautions mean you can train your presenters on all aspects of using Myriad 5 Playout for live playout without the risk of effecting your actual station output.

By default a Child also shares the settings with it's Parent, meaning you don't have to configure all the options in 2 places, but you can also set the Child to have it's own settings, which can be useful if you need to send now playing information using a different instance of Myriad OCP for your Child station.

Caution: Remember that your are still using the same MediaWall so editing Media Items will still impact your main output!

But what about On-air Control and OCP?

Good question, and the short answer is that each Station can maintain On-air Control of itself but OCP (the thing that drives your website with what is playing etc) can only be connected to by one Station at a time.

So in the case where you have a Studio Station and a Automation Station, both have could have On-Air control (of themselves) but only one of those can connect to OCP at anyone time.

This is fantastic for Automation scenarios, as you can set up Myriad Playout in the Studio to connect to OCP, and set it to "never release", so as long as it has On Air control it will force it's connection to OCP, and not let go until On Air control is lost.

A quick overview of the various parts that makeup the 'database' in Myriad as well as some practical scenarios to explain just why it is some complex! In a future post we will delve more into to Myriad 5 Playout works with Myriad OCP and how it can be used to drive many digital platforms from studio signage to twitter.